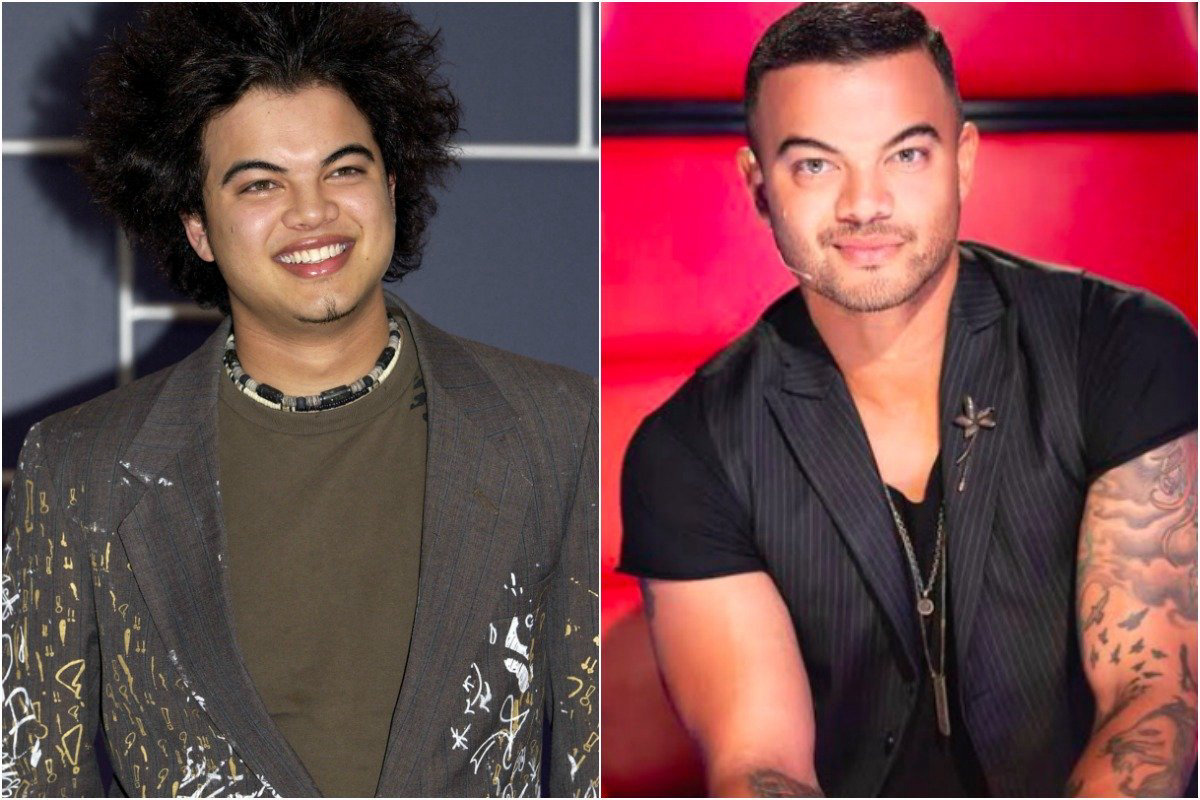 If you’ve got 2020 suave short-haired Guy in your head, shave off two decades.

We’re talking the 21-year-old Adelaidean with the great big mop of hair — or fro as you might remember it being called.

It was a chilly morning in 2003 and a young Guy found himself in a line of 2000 people at 7am, nervously preparing to audition for season one of Australian Idol.

He walked onto the little makeshift stage in front of Marcia Hines, Mark Holden and Ian Dickson and was met with an “Is that bed hair mate?” from Dicko.

“Nah electric socket,” he joked back.

Wearing a sheepskin jacket and flared jeans with dress shoes, his questionable (sorry, Guy) fashion choices were soon forgotten when he opened his mouth and belted out a Stevie Wonder classic.

“Dicko told me I looked crap, which took me by surprise because I wasn’t expecting those kinds of comments,” Guy told the cameras at the time.

Outside he was greeted by his then-girlfriend (now wife) Jules in the waiting room.

It was the day that changed everything for the Sebastians.

Guy Sebastian was named winner of the entire show on November 19, 2003, and walked away with a BMG recording contract.

His winning single 'Angels Brought Me Here' quickly reached number 1 on the charts. If you're struggling to remember that song you'll remember the first line:

"It's been a long and winding journey, but I'm finally here tonight. Picking up the pieces walking back into the light."

Shannon Noll was the runner-up, and soon after released 'What About Me'.

Following his Idol win, Guy went on to record his debut album Just As I Am in six days because of time restrictions, before hopping on a plane to the UK to compete in World Idol.

He finished seventh, but that didn't stop his upwards trajectory on the Aussie charts. His second album Beautiful Life went double platinum.

Closer To The Sun, his third album released in 2006, came off the back of a staggering half a million record sales.

"I had six or seven singles tank."

Guy is the only Australian male artist to get six number one singles and two number one albums in chart history.

"Literally no (radio programmers) added one song that I thought would be a smash. When that happens, you start to believe you're a failure," he added.

"But the resilience comes when you remember the reason you do this is not for the charts, it's for the things I believe in, and wanting people to be affected by my art."

Behind the scenes, Guy also experienced bullying after winning Idol.

“I was not in a good place,” he told Stellar Magazine earlier this month.

“I thought everyone was out to get me. I had people say derogatory gay slurs to me, I had people flick cigarettes into my afro. I couldn’t believe the ugliness. I wish I’d had the tools to deal with it back then.”

Guy's experience of being bullied is one of the reasons he and his wife Jules now have candid conversations with their sons, Hudson and Archer.

"We’re open and honest and tell the boys they can tell us anything," Jules told the publication.

“I tell them every night before they go to bed, ‘You could never do anything that would make me think less of you. Nothing will make me love you less, and I will always be so proud of you'," Guy added.

Last year, Guy spoke of another difficult time in his career, pre-idol days when he was told he wasn't thin enough or good-looking enough to be successful.

"I recorded demos and I went to labels, and they told me I was too fat," he told Nine.

"They told me I didn't have the look. I was a weird-looking dude with an afro, like fair enough!"

Guy Sebastian, the judge and mentor.

After touring Australia and the US, Guy became a judge on Channel Seven's hit television show The X Factor (while also pocketing a casual six ARIA nominations in the same year).

It was also the year he released 'Who's That Girl' which reached platinum in four weeks.

For the next two years, Guy continued to mentor on X Factor with his contestants Reece Mastin winning in 2011, and Samantha Jade in 2012.

He is now a judge on The Voice, after first taking on the role during last year's season.

"I went back I guess to Jules because I knew she loved me for who I was."

Guy went on to marry that young Jules Egan, who we saw in the very first audition clip. In fact, Jules who also sings, auditioned on that same day but didn't make it through.

But their relationship wasn't without its hiccups.

Jules and Guy met long before Idol, when they were just 12 years old and singing together at a wedding. They grew up childhood sweethearts.

Straight after Guy's Idol win, they broke up, and he dated a few other people, including Delta Goodrem who had been his "hall pass" while with Jules.

"I went back I guess to Jules because I knew she loved me for who I was," Guy told 60 Minutes.

"And so I flew to Adelaide, and I said to her, 'I'm famous now. I could be with supermodels and that, but do you want to get back with me?'

"I mean, what an offer," Jules laughed in response.

The couple married in 2008 and live in Maroubra on Sydney's Eastern beaches, with their two sons, Hudson and Archer.

If I’m being honest, when I was a kid growing up in the outer suburbs of Adelaide, my dreams were somewhat small. I thought that the path for my life would be to finish my medical radiation degree and maybe quench my musical thirst by doing some gigs on the side, or, to continue singing in church. I’m sure I still would have been happy, but little did I know, the plans for my life were quite different. Our family migrated to Australia in 1988 -the bicentenary year. I was six years old at the time. My father, Ivan, is a geologist and a man of honour, faith and loyalty. My superhero mother, Nellie, held our family together by raising four boys when Dad had to go off to the oil rigs to work. Growing up, we were surrounded by love and for that I am so grateful. My parents sacrificed a lot to give us the best education they possibly could. Today I was told that I am going to be made a member of the Order of Australia. My first thought was, “I can’t wait to tell Mum and Dad.” My brothers and I long to make them proud and I knew that this news would give them such a feeling of elation. I was then overcome with a flurry of emotion, mostly gratitude. I have this career and life because of so many people who believe in me. I know that with that belief comes great responsibility and I have tried my best to use my position to bring light to other people’s lives. I’ve struggled through my own imperfections and kept my eyes on the thing that matters most - Love. Throughout my career I’ve been lucky enough to receive some awards, meet and work with my idols and tick off some bucket list moments. This recognition however, is one that I am most proud of because it is not only for my contribution to the music industry but for the work we have done through our Foundation, The Sebastian Foundation. I am so humbled to be able to help people in need through this vessel and I pray that many lives will be changed from the work that we do in the future. Thank you to everyone for your continued support and love. I still can’t believe this news!

Guy has previously told Mamamia the secret to their relationship success is their friendship.

"I'd love to put [our 17-year relationship] down to myself, but I'm lucky with Jules. She's very easy going and supportive, we just hang out, we're really good friends above anything else.

"I think it's the key... you can get through a lot of other things if you're good mates."

The pair made a conscious effort to get on the health bandwagon in 2017, undergoing a dramatic eight-week health and fitness transformation in the lead up to Guy appearing on the cover of Men's Health.

The pair said that decision changed their life, and they've since completely changed their habits and are living a healthier, happier life.

"I have more energy, I am happier, I am in a better mood, I am a better mum and a better wife," Jules told Body & Soul.

Jules is a stylist, writer and presenter by trade, but the couple also run The Sebastian Foundation together on the side.

They partner with charities and help families suffering from illness, living in poverty or experiencing domestic violence.

"The Sebastian Foundation came about quite organically, and I always wanted to have something official where we could make an impact. I hate the term 'give back', but I'm constantly exposed to people who go through so much in life, and just in my fan base, the plethora of things that people face from domestic violence, depression sickness... and now we're geared towards mental health, which is more in our sphere really," Sebastian told 9Entertainment of the charity.

Guy Sebastian: The Man The Music.

Speaking to 9Entertainment, Guy shared that the documentary was "tough for me to watch".

"It's like watching your life flash before your eyes," he said.

"There are certain trigger points for me that made me really emotional. My kids of course, I'm always emotional about my kids."

Speaking to TV Week, the 38-year-old admitted that he feels "a bit young" to be having a "This is Your Life moment".

"I figured if both Justin Bieber and Taylor Swift have done behind-the-scenes docos recently, I could too," he added.

In the documentary, fans got an insight into Guy's childhood, family, and career.

In one particular scene, the singer's mother, Nellie, shared a number of Guy's school photos. 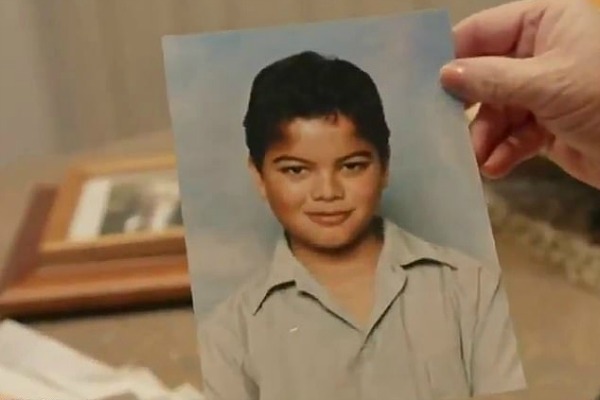 "I was never that kid that grew up dreaming to be famous. It didn't seem like a viable option — I grew up in suburban Adelaide! I was an immigrant, and a weird-looking chubby kid with an afro, and it's not something I ever thought would be possible," he told 9Entertainment.

"To think that I would ever think that I deserved to meet Oprah or perform to huge audiences, I think that's the moment that it's all done for me."

Guy Sebastian: The Man The Music is available to watch on 9Now.