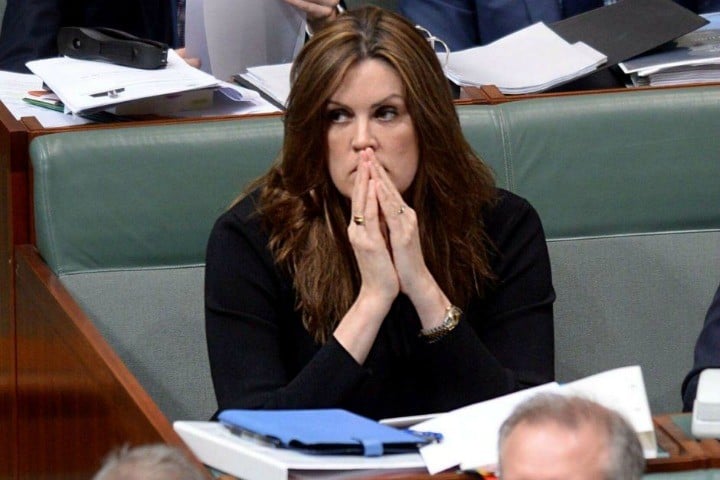 Peta Credlin has done the Liberals a favour by championing the rise of conservative female politicians. In the process, she’s done her own career a favour too, writes Paula Matthewson.

It went largely unreported, but on the weekend one of the Federal Government’s most prominent women challenged the Liberal Party to do something about its woman problem.

Apparently redefining what it means to keep a low profile, the Prime Minister’s chief of staff Peta Credlin spoke from the audience of a Liberal Party forum on gender and politics, reportedly taking a shot at the gendered put-downs levelled at powerful women, and describing politics as “the toughest, most masculine, most exclusionary place”.

Credlin’s strongest criticism however was aimed at the Liberal Party itself, for entrenching inequality by neglecting to pre-select women candidates for safe seats. Echoing the PM’s justification for initially putting only one woman in cabinet, Credlin argued that without female MPs in safe seats, there is no “pipeline of women” gaining experience and credentials over time that would qualify them for cabinet:

Our women are not in the safe seats, so when we lose government, we lose our pipeline. So it was really hard to put a ministry together in 2010 when … we didn’t have a pipeline of women.

Of course, this argument doesn’t quite stack up when it comes to the well-credentialed Minister for Human Services, Marise Payne, who is a Liberal moderate and still not in cabinet despite having been in Parliament for 18 years.

Unless you have women in places where decisions are made, either on committees who are making pre-selection decisions, at state divisions as presidents and as leaders … you’re not going to get women (to) run for seats.
If you don’t get women (to) run for seats, you’re not going to get female ministers, and if you don’t get women ministers … you’re not designing popular policy for half the population. We would never get elected if we pissed off and marginalised half the electorate. We are half the electorate.

Credlin’s comments are not her first on the broader need to support Liberal women.

It’s nearly a year ago that news first began to emerge that Credlin was actively seeking ways to help women progress through the ranks of the Liberal Party.

A well-placed leak to the media in July 2014 reported that Credlin had told a private gathering of female Coalition staffers she was determined to make a difference for women in conservative politics while serving as chief of staff to the Prime Minister, and asked for their ideas about how to do so.

This came not long after Clive Palmer referred to Credlin as a “top dog” and erroneously suggested that the PM was only keeping his paid parental leave policy so that Peta Credlin could benefit from it.

After gathering feedback from that first discussion, Credlin went on to establish a formal network for female Coalition staffers, reportedly to provide support for each other and maximise their exposure to other women in leadership roles. However, Credlin also told a reporter that a motivation for creating the network was the silence from feminists following the attack on her by Palmer. According to Credlin, “This solidarity that women are supposed to have just wasn’t there.”

Other than the Prime Minister who launched Credlin’s network in October last year, Credlin invited not one Coalition parliamentarian to that event; not even the sole woman in cabinet (at the time) Julie Bishop, or the Minister Assisting the Prime Minister for Women, Michaelia Cash. While this can’t be considered a direct snub to the Foreign Minister, enough information has emerged since then to suggest that when it comes to Bishop, Credlin is not exactly a team player.

So while the intervention from one of the Government’s most senior (but unelected) women is welcome, given the problem she’s identified is real and potentially a big risk for the Liberal Party, it’s important to understand that Credlin’s motives aren’t necessarily altruistic.

Credlin is on the record confirming she has no intention of moving into politics “at this time”. However, a senior Liberal in the state division that would hypothetically pre-select Credlin said she is too “toxic” and would not win pre-selection.

If Credlin is indeed interested in moving to politics eventually, she needs to rebuild bridges and establish networks before she has any hope of neutralising her perceived toxicity. And a network of up and coming female staffers, most of whom would also be Liberal Party members, would be the perfect way to start that reputation refurbishing exercise.

It’s reported Credlin concluded her contribution to the forum on the weekend with a rallying cry to a room full of past and present female Liberal politicians. Urging the women to be “fair dinkum” in bringing others with them as they climbed the ladder, Credlin also warned them not to be “one of those women who gets somewhere and pulls the ladder up behind you, because there are a lot of women who do that”.

This is undoubtedly true, and it’s hard not to wonder whether Credlin had a particular Cabinet minister in mind when she said it. More importantly, given Credlin’s take no prisoners management style, it’s advice she should also be taking.

Paula Matthewson is a freelance communications adviser and corporate writer. She was media advisor to John Howard in the early 1990s. She tweets and blogs as @Drag0nista.

This post originally appeared on ABC News. It has been republished here with full permission.

For more political posts, take a look through these:

“Being a hater might help you win at politics, but you’ll lose at life.”

The government just made the cruelest cut to funding. And it is women and babies who will be hurt the most.

Did the government pay people to turn boats back to Indonesia?

“Our government still have a women problem. But women aren’t the problem.”