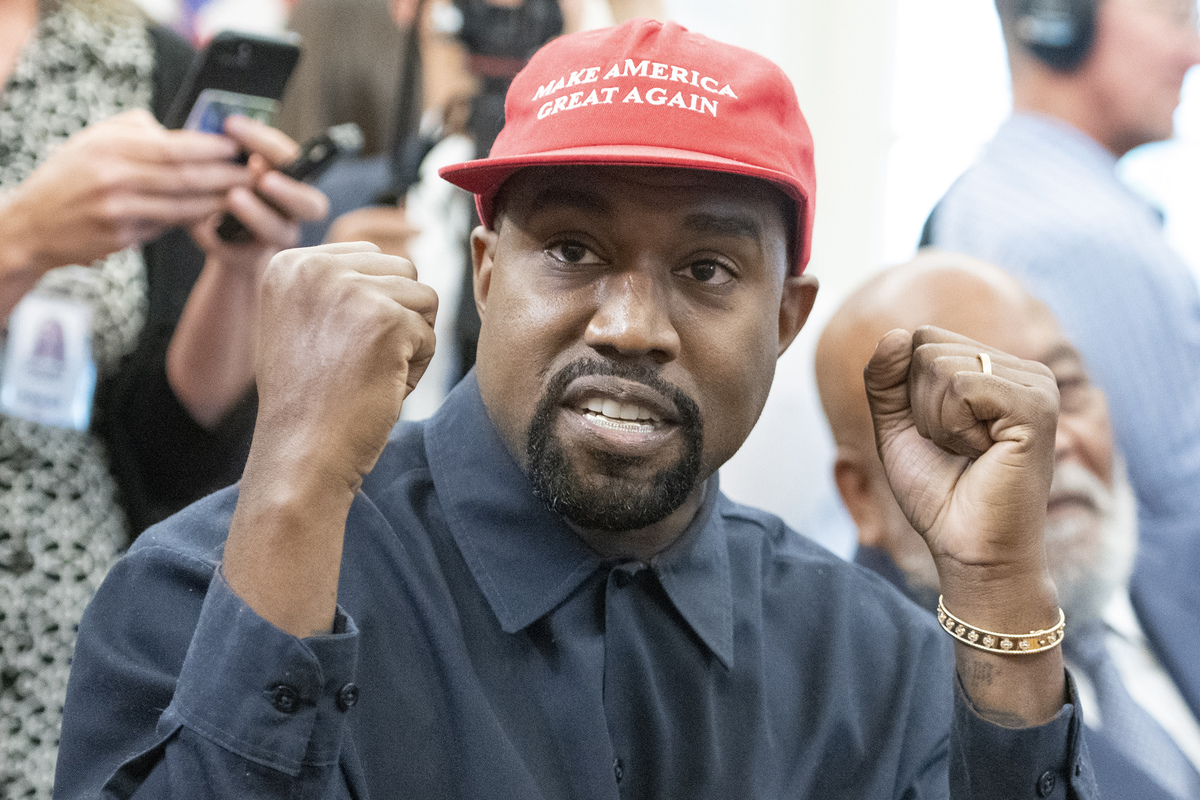 Kanye West is running for the United States Presidency and this is, allegedly, not a joke.

The 43-year-old rapper is not exactly qualified (not that that's ever stopped anyone), but he is going ahead with the plan along with a catchy slogan, #2020Vision, and new political party called the Birthday Party.

Also, if you just read that paragraph and wondered if this is satire, or if we're all being trolled... then, same. Just when you thought 2020 couldn't possibly get any more bizarre.

The thing is, this would be mostly amusing if it weren't for a recent Forbes interview to kick off West's campaign. In the piece, he discussed his political ideas, gave legitimacy to dangerous conspiracy theories, explained his previous support for current President Donald Trump and announced he had COVID-19 in February.

In the article, Forbes editor Randall Lane wrote about two text messages he received from West just a few weeks ago: "Trump 2020", one said, with a raised fist emoji. But hey, things change, and now West is taking off his MAGA hat.

"It looks like one big mess to me," he said. "I don't like that I caught wind that he hid in the bunker," referring to a report in June that Trump and his family hunkered down in a bunker under the White House while Black Lives Matter protests took place nearby.

He announced his intention to run on Twitter, and was quickly endorsed by his friend Elon Musk, and wife Kim Kardashian-West.

He has named Wyoming "biblical life coach" Michelle Tidball as his running mate.

We must now realize the promise of America by trusting God, unifying our vision and building our future. I am running for president of the United States 🇺🇸! #2020VISION

So what exactly are West's political views? Brace yourself because it's... a lot.

Firstly, on COVID, a virus that has infected more than 12 million people worldwide and caused 550,000 deaths:

"We pray. We pray for the freedom. It’s all about God. We need to stop doing things that make God mad."

He said he contracted the virus in February and experienced "chills, shaking in the bed, taking hot showers, looking at videos telling me what I'm supposed to do to get over it.

"I remember someone had told me Drake had the coronavirus and my response was Drake can't be sicker than me!"

West is anti-vax, calling a future COVID-19 vaccine "the mark of the beast" and spouting a conspiracy theory that vaccines are being used to track the population (which, to be clear, is not true).

"It's so many of our children that are being vaccinated and paralysed... So when they say the way we're going to fix COVID is with a vaccine, I'm extremely cautious. That's the mark of the beast. They want to put chips inside of us, they want to do all kinds of things, to make it where we can't cross the gates of heaven," he said.

"I'm sorry when I say they, the humans that have the Devil inside them," West explained. "And the sad thing is that, the saddest thing is that we all won't make it to heaven, that there'll be some of us that do not make it. Next question." 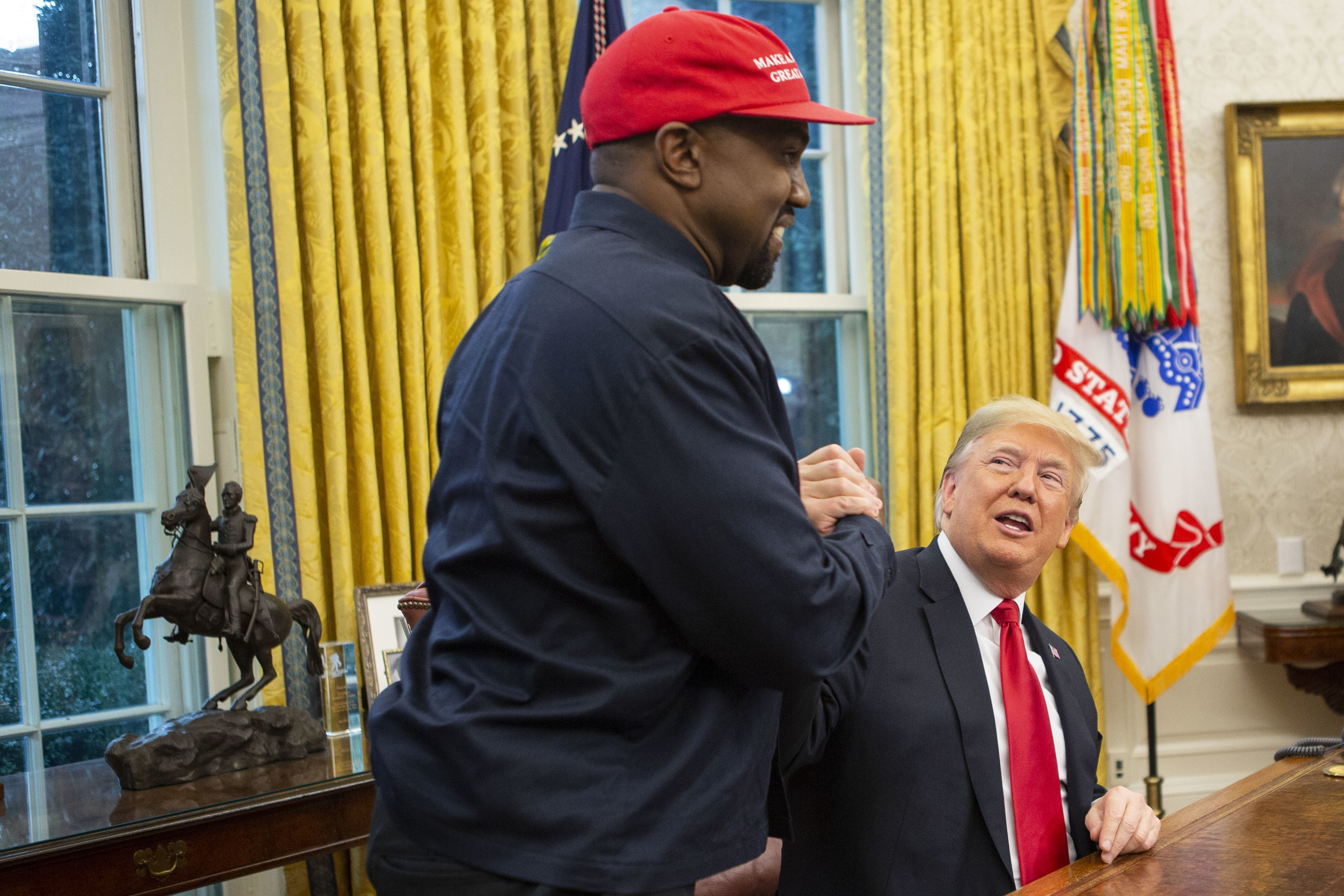 "I am pro-life because I'm following the word of the bible," he said, saying Planned Parenthoods were "placed inside cities by white supremacists to do the Devil's work".

Of course, one of the most important things about running for any public office should be policy. But West is yet to really sit down and figure that all out.

"I don't know if I would use the word policy for the way I would approach things. I don't have a policy when I went to Nike and designed Yeezy and went to Louis and designed a Louis Vuitton at the same time. It wasn't a policy, it was a design. We need to innovate the design to be able to free the mind at this time."

He said he hasn't really researched taxes, so is yet to come up with his plans about that, and is still working on his foreign policies too (besides focussing on "protecting America, first, with our great military").

His other priority is to "clean up" the chemicals "in our deodorant, in our toothpaste" that "affect our ability to be of service to God".

He said he envisioned a West administration running a bit like Wakanda, the fictional Sub-Saharan Africa nation in Marvel superhero movie Black Panther.

"I'm gonna use the framework of Wakanda right now because it’s the best explanation of what our design group is going to feel like in the White House... That is a positive idea: you got Kanye West, one of the most powerful humans - I'm not saying the most because you got a lot of alien level superpowers and it's only collectively that we can set it free.

"Let'﻿s get back to Wakanda... like in the movie in Wakanda when the king went to visit that lead scientist to have the shoes wrap around her shoes. Just the amount of innovation that can happen, the amount of innovation in medicine -like big pharma - we are going to work, innovate, together... We have so many soldiers that die for our freedom, our freedom of information, that there is a cure for AIDS out there, there is going to be a mix of big pharma and holistic."

West is running because God appoints the president (Let's just ignore that America is a... democracy), and he reckoned God may just like him.

"God just gave me the clarity and said it's time. You know I was out there, ended up in the hospital, people were calling me crazy.

"﻿I'm not crazy. Between all of the influences and the positions that we can be put in as musicians - you go on tour, you put out all these albums, and you look up and you don't have any money in your account. It can drive you crazy, through all of that I was looking crazy because it wasn't the time. Now it's time. And we’re not going crazy, we're going Yeezy, it's a whole 'notha level now."

In order to complete the whole 'notha level, West is going to need to file some paperwork.

On Tuesday, a spokesperson for the Federal Election Commission confirmed to Billboard West had not yet filed the paperwork to make his presidential bid official.

flyingdale flier a month ago

Reply
Upvote
3 upvotes
@flyingdale flier wow, you don't give women much credit, do you!
angeline 25 days ago

Reply
Upvote
1 upvotes
@rush yeah, I'd say most women couldn't care less about KK, and those that do don't necessarily like her husband. It's more like they tolerate him. His comments about abortion won't do him any favours.
rush a month ago

Reply
Upvote
4 upvotes
“When you’re in this state, you’re hyper-paranoid about everything. Everyone — this is my experience, other people have different experiences — everyone now is an actor. Everything’s a conspiracy.
“You feel the government is putting chips in your head. You feel you’re being recorded. You feel all these things.”
“You have this moment [where] you feel everyone wants to kill you. You pretty much don’t trust anyone.” - Kanye West, talking to David Letterman about being in a manic state due to his bipolar disorder.
fightofyourlife a month ago

Reply
Upvote
5 upvotes
@rush I believe Kanye has admitted that he no longer takes his bipolar meds. It's very concerning.
cat a month ago