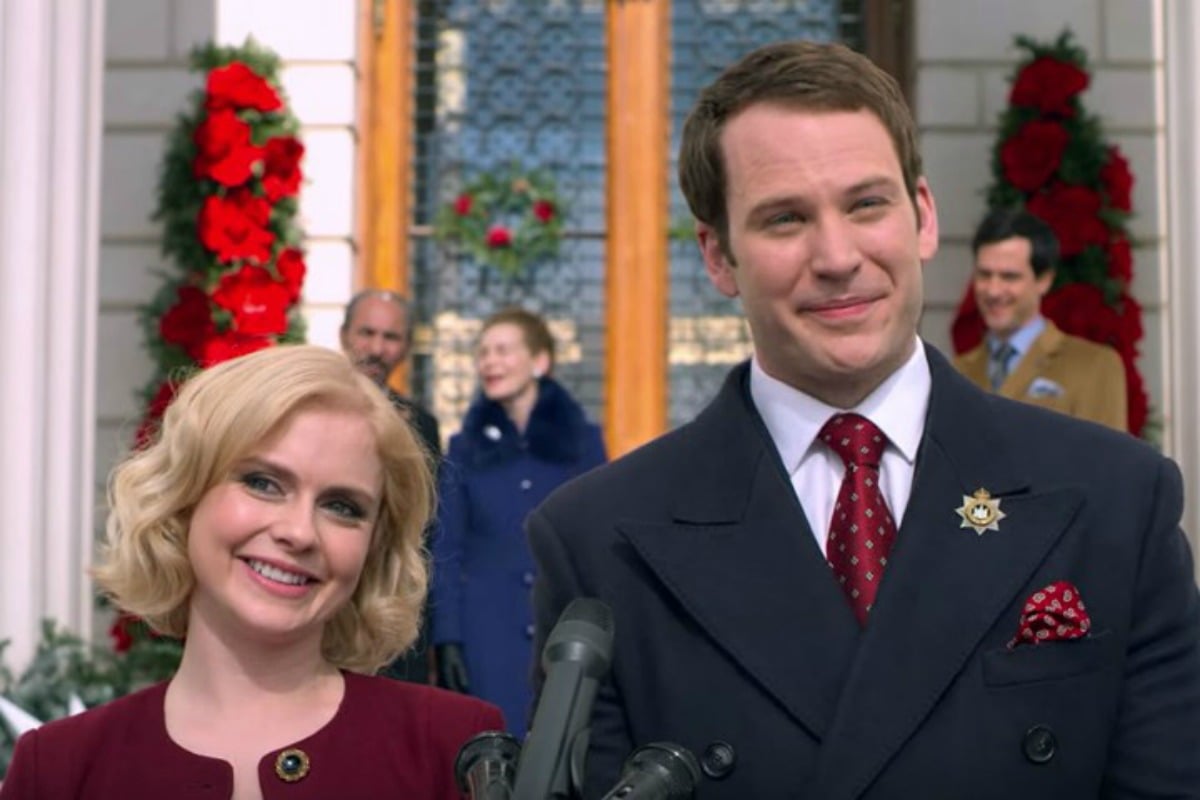 Netflix’s original ‘so-bad-it’s-good’ Christmas movie A Christmas Prince opened the doors for all of its other wonderfully bad Christmas content.

And for that, we are eternally grateful.

This year, we’ve been gifted with the third installment in the Christmas Prince series, A Christmas Prince: The Royal Baby. Isn’t it weird how Richard and Amber’s story perfectly matches up with the timeline of real-life royals Prince Harry and Meghan Markle? Such a strange coincidence.

The Royal Baby focuses on the upcoming… royal baby, obviously, but while battling with cravings and an inability to put on her slippers, Amber has a lot of other sh*t to deal with.

Richard must sign a 600-year-old truce treaty with visitors from a nearby kingdom. The treaty then vanishes, which is really inconvenient because it just so happens that if it is not signed before Christmas, their first born child will be cursed! Disaster.

There’s also a feminist subplot, which is cool, a TRULY ridiculous horse riding scene, and a baby shower.

It’s definitely the weirdest of the trio, because curses and ghosts and Amber’s abilities as a investigative journalist, despite only having one actual journalism assignment under her belt (and falling in love with the subject of that assignment, because what are professional boundaries?).

As you can probably tell, the movie left me with a number of questions. Such as:

1. How does Amber still have a blog?

If we’ve learned anything from Meghan Markle, it’s that in the royal world, blogs = bad.

MAFS: One Bride Down, Nine To Go

But Amber's has endured, which is surprising because it looks like it was designed by a 12-year-old for a school assignment.

2. Has the king ever eaten a donut before?

Have you no respect?

3. WHAT HAPPENED IN EUROPE?

During the film we see a map of Aldovia (featuring nearby kingdom Belgravia, from The Princess Switch) which has some seriously weird borders, implying something very disturbing must have gone on in Europe.

At some point, Aldovia conquered nearly all of the Balkan states.So if you're wanting to book a sailing tour of Croatia or visit its Game of Thrones sets, say hey to Amber for me!

4. That's not how treaties work, right?

What kind of treaty requires you to re-sign it at Christmas, every 100 years, otherwise two countries are technically at war and a literal curse will be placed on the first born heir?

5. Why does Amber not know curses aren't real?

AMBER, YOU'RE SMARTER THAN THIS AND ALSO AREN'T YOU AN INVESTIGATIVE JOURNALIST (or something).

(Although, now that I think about it, this is supposed to take place in the same Netflix cinematic universe as The Knight Before Christmas, which features curses and time travel, so ¯\_(ツ)_/¯)

6. Do these royals not have staff?

King Richard jumps on a horse and goes to save Amber's doctor from a car crash himself.

He also tries to build a cot on his own, and then ropes in the King of Penglia to help him.

Amber sends Richard's mother and sister to go check out the castle's dungeon.

DON'T YOU HAVE PEOPLE TO DO THIS FOR YOU?

7. Can we talk about how the entire family barge into the sonogram room AND the room after birth?

Give a queen some space, you guys!

8. How did the queen mother know how to pick a lock with a bobby pin?

We can argue that Queen Helena and Princess Emily should absolutely not have been the ones forced to go down into the castle's cellar (see question 6), because so true, but the most confusing thing about this whole scene was how the queen mother suddenly remembered she could unpick a lock with a bobby pin.

Real life lock picking is nothing like the movies, but also, surely she should've remembered this before she let Emily use one of her crutches to try and save them, causing her to fall over and hurt herself.

9. Are we going to acknowledge that this bump timeline is wildly unrealistic?

The movie begins with Queen Amber and King Richard announcing they are expecting to approximately 12,000 journalists who care too much. She's supposedly 8.5 months pregnant, due January 11, and THIS DOESN'T ADD UP.

Amber had just talked us through her busy year, full of public outings and making Aldovia a better place, and she's about to take part in her last official engagement before the birth so:

1. How is it the kingdom didn't know she was pregnant beforehand?

2. Are we really expected to believe that's an almost-ready bump?

Then she suddenly goes into labour on Christmas Eve and gives birth within minutes (after her mildly inconvenient labour pains stop momentarily, so she can deliver a monologue to solve the mystery of what happened to the missing treaty). But then... THE SIZE OF THAT BABY. There's no way in the world that giant child came out of that tiny bump.

The A Christmas Prince movies are absolutely ridiculous - and seem to be getting worse (or better?), but Netflix know we can't resist them. Catch you next year for the inevitable fourth installment.