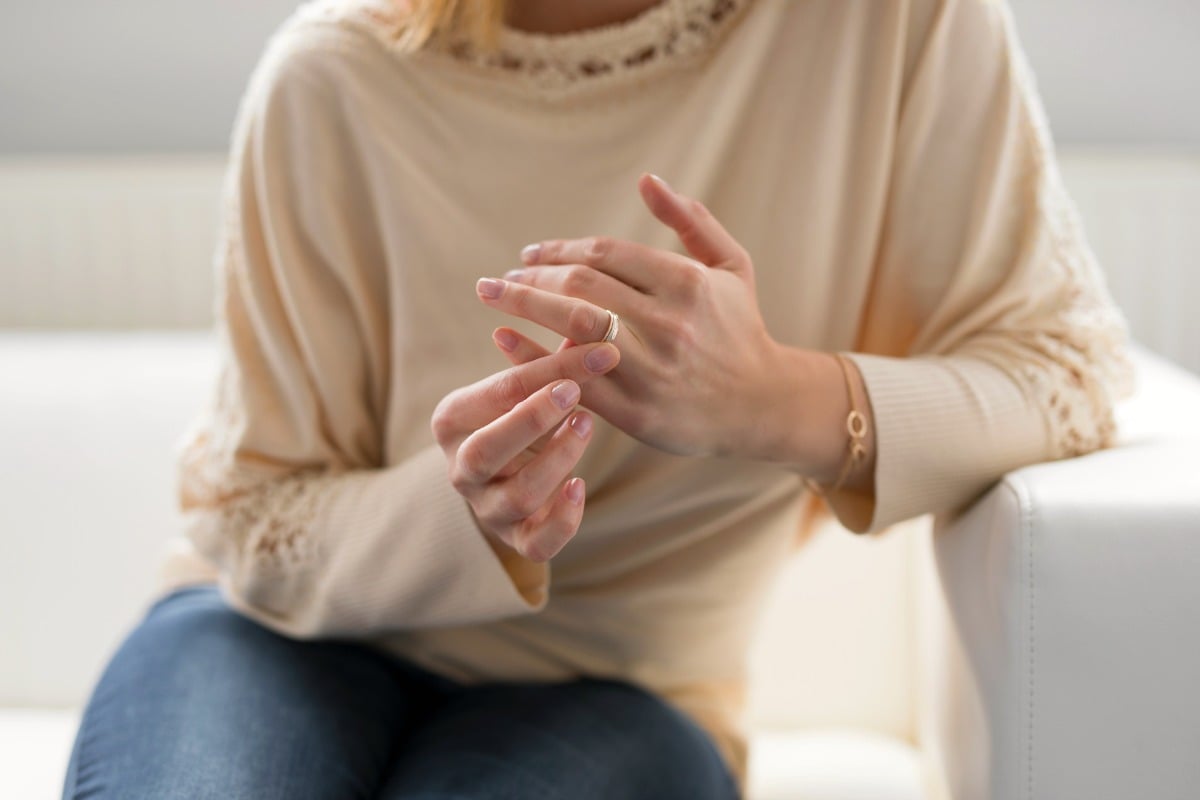 “We would exchange smiles and platitudes about the kids. I learnt he was working part-time as a builder and was at home a lot with his girls,” Karen tells Mamamia.

“It began to get a little flirty just before Christmas with the occasional cheeky text message. We didn’t see each other over the summer break so when we met up again at school in January, the sexual tension was high.

“That night he sent me an explicit text message describing what he wanted to do to me, and I almost dropped my phone.”

Karen and Simon began seeing each other for sex once a week. In between each clandestine meeting there were dozens of lust-filled online exchanges.

“It has been very fast and very intense. The sex is kinky – we dress up, tie each other up and act out fantasy role play scenarios. I can tell him exactly what I want and how I want it.

“I feel more awake and alive than I have in a long time.”

Karen has suffered with anxiety for many years and her relationship with husband Dan* had been under pressure from his excessive drinking.

“I met Dan in 2007 at a time when we were both ready to settle down. We had a lot in common, including being from large, happy families.

“We moved in together and soon discovered I was pregnant. We were delighted and after our son was born we decided to get married. I often think now if we hadn’t had our children, we wouldn’t still be together.”

While Karen and Dan used to enjoy sharing a quiet drink together in the evening, Dan began to take it to another level after the kids came along.

“Our relationship changed very quickly. We went from having fun with friends to being mostly at home with a young baby and eventually three young children to care for.

“I would spend all day caring for the children and looking after the house while Dan was at work.

“In the evening he would arrive home with a case of beer and drink until he passed out. It was awful and the resentment soon built up.

“We fought often. I tried to shield the kids but occasionally I was exhausted and would lose it at him after he asked ‘where dinner was’ while I tried to get the kids settled for bed.

“I would shout and my son would say ‘poor daddy!’ which hurt like hell.”

As her youngest child grew out of the intense toddler phase, Karen decided that she needed to make big changes.

“I told Dan enough was enough and that I wanted out. I could no longer see my future with him, I was miserable and he wasn’t the dad I thought he was going to be.

“In fact, that is what first attracted me to Simon in the school yard. I could see him with his girls and I thought, ‘why can’t Dan be more like that guy?’”

Dan took Karen’s outburst to heart and for the first time in many years, stopped drinking and began helping around the house.

“My home life has improved a lot. Dan now helps out with the kids and the day-to-day running of the household, which is good as I have always managed it around my part time work.

“The change in Dan’s behaviour hasn’t made me want to end it with Simon. I feel guilty of course but I feel it is too little too late on Dan’s part.”

Karen has considered all the options when it comes to leaving Dan, but that does not involve moving things to the next stage with Simon.

“I am happy with our little secret. I care for Simon but I am not in love with him. I just enjoy being fulfilled sexually and emotionally for the first time in many years.

“Simon gives me the intimacy I crave and so I have made a conscious decision as an adult to have an affair outside of my marriage. I feel attractive, relaxed and the sex is mind-blowing.”

As Simon is also married, Karen knows what the consequences would be in their small community if the truth about their relationship came to light.

“I am not interested in being the one to break up Simon’s family. I am also not currently keen to break up my family.

“The kids need their father, especially now he has finally started to show interest in helping me raise them.

“Our home is also his home, and financially it would be a disaster for us to get divorced.

“I am aware that Dan’s income pays for our significant mortgage and so I am trying to imagine a future where we stay together for the kids and I find my sexual fulfilment elsewhere.”

“I am not sure what the future holds for me, all I know is, my children are cared for and loved and I am living for the now.

“I am happier than I have been in a long time and if nothing else, life is certainly interesting.”

* While Karen is known to Mamamia, her name has been changed for privacy reasons.