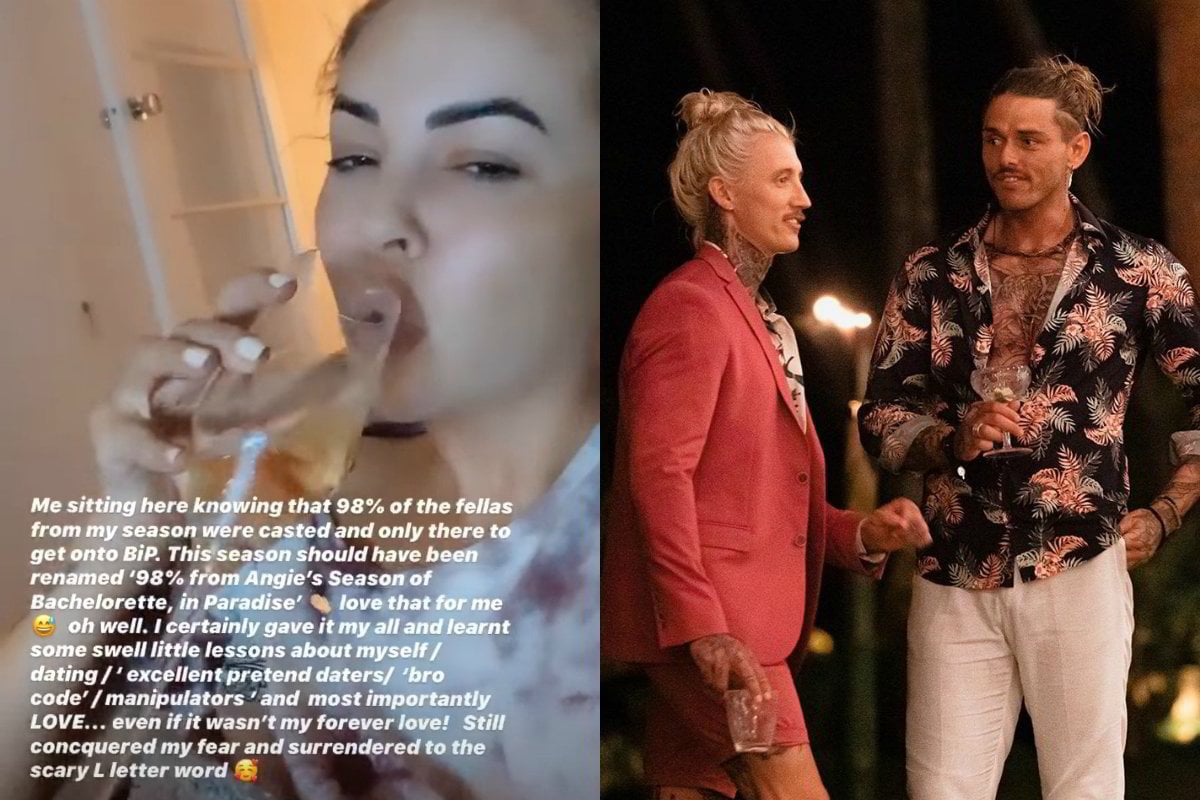 This week, Angie Kent - like many of us - settled in for four evenings of watching good looking people in Hawaiian shirts drinking cocktails and fighting over 'bro code', thanks to Osher and Bachelor in Paradise.

The difference is, Angie had met precisely all of the men on screen.

Because they had all, at the same point in time dated her during her season of The Bachelorette.

"Me sitting here knowing that 98 per cent of the fellas from my season were cast and only there to get onto BIP," she captioned the post.

"This season should have been renamed '98 per cent from Angie's Season of Bachelorette, in Paradise'... Love that for me."

"Oh well. I certainly gave it my all and learnt some swell little lessons about myself/dating/'excellent pretend daters'/'bro code'/'manipulators' and most importantly LOVE... even if it wasn't my forever love! Still conquered my fear and surrendered to the scary L letter word." 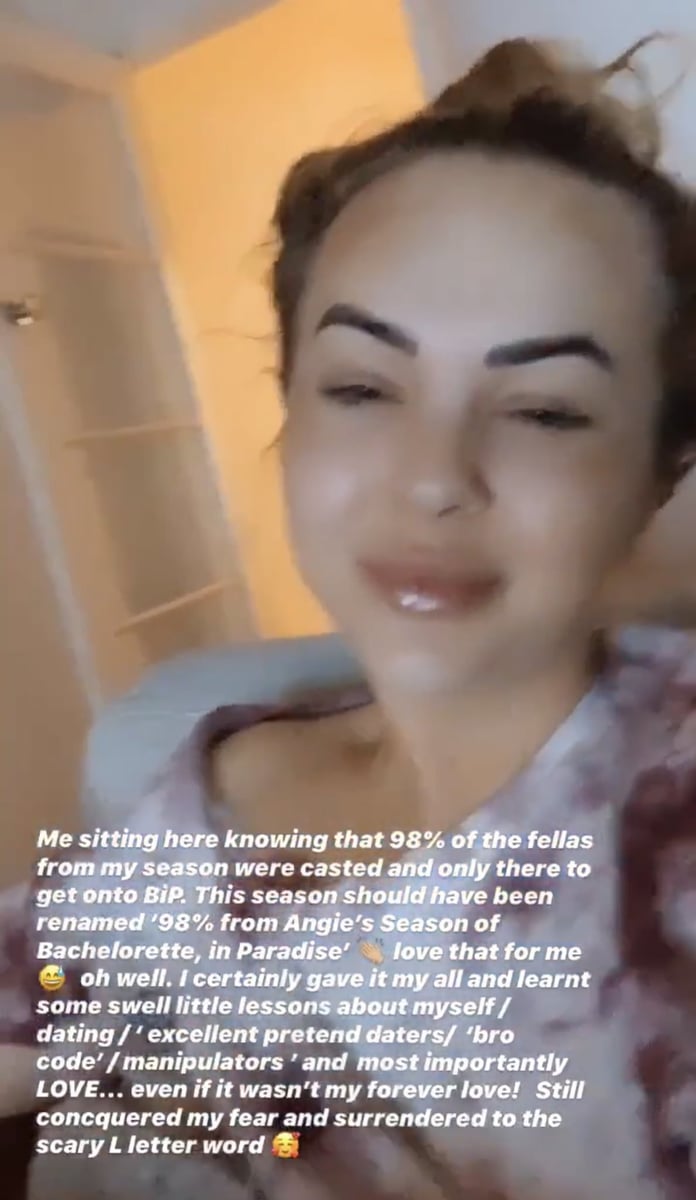 It's clear casting for this year's BIP was... difficult, at least when it came to casting past Bach men. Why else would Ten need to introduce three 'clean skins'? (Still not okay with that name, at all).

So is Angie right? Did these dudes use her as a stepping stone towards a holiday in Fiji and a bunch of Instagram followers? Let us investigate.

Who was on Angie's season?

8/12 of the men we've met, so far. 8/9 if we are only counting those previously involved in the Bachelor franchise.

Some we knew very well: Timm and Ciarran, for example. Others we... didn't really know at all, but now we are glad to; like Glenn and Alex. Some we still don't really know: #JusticeForNiranga.

angie sitting at home watching everyone from her season on BIP #BachelorInParadiseAU pic.twitter.com/zwTWCFEvYa

why were the cleanskins needed if all of angie’s season wanted to come on? #BachelorInParadiseAU pic.twitter.com/1CRUNkiUYl

When was The Bachelorette filmed, and when was Paradise filmed?

Let's get across the timelines here.

Angie's season of The Bachelorette was filmed last winter, beginning in June.

The final week was filmed in late August - we know this because Osher wasn't around due to the birth of his son, Wolfgang, on August 23.

Bachelor in Paradise began filming in early November - so those who Angie sent home earlier, like Scot and Niranga, had at least four months between filming. For runner-up Timm, it would've been about two and a half months.

Don't mind us, just borrowing from the official dictionary of Jamie. ¯\_(ツ)_/¯

Angie didn't hold back with her criticism of "excellent pretend daters/bro code/manipulators". Who exactly could she be referring to?

For starters: has any reality TV personality caused a bigger, quicker change in public opinion than Ciarran? Throughout The Bachelorette we all loved him, and we cried real tears when he left heartbroken after the death of his grandmother.

But, uh, Ciarran is different on BIP.

Angie's 'bro code' sledge is almost certainly a direct dig at him, after he made a big deal of Matt wanting to date his ex-girlfriend Renee, despite him cheating on her with her friend and hooking up with her friends in Fiji.

Then there was the fact when Renee arrived earlier in the season she revealed Ciarran had called her while still in The Bachelorette mansion - which viewers and Angie didn't know - and they got back together for a couple of months after he left the show.

Remember when Timm was the wholesome sunflower wielding angel who cared for Angie? Remember when Ciarran was the charmer who loved his grandma? Let's go back to then. 2020 can get lost. #BachelorInParadiseAU

Then there's his mate, and this next theory hurts deeply.

Last week, Timm was seen out and about in Melbourne with a woman who was quite clearly not Brittany Hockley, who we're watching him couple up with in Fiji.

And now, just to make things even more juicy, it seems the ~mystery woman~ has been idenitifed as his on and off ex-girlfriend Briana De La Motte.

According to the So Dramatic! podcast, Timm supposedly broke up with Brittany after they left Paradise and later got back together with his ex.

"Timm and Brittany are not together [anymore]. They left Paradise together, but Timm ended things with her a few weeks after that, and she was devastated," host Megan Pustetto claimed.

"This week, Timm was spotted with a mystery brunette. She's his ex-girlfriend who personally confirmed to me after The Bachelorette last year that her and Timm dated for five years and had been on and off for the last two years."

And there's more. Apparently the pair were still chatting during Timm's time on The Bachelorette last year.

"I am told they were still in contact during Angie's season. Timm hadn't gotten over their break-up and would talk about her constantly in the house," Megan said.

"They got back together once he was off the show, and they have been on and off since."

Timm has also recently started a clothing business, so there's speculation he's looking for a platform to help him launch this, but we're relieved to say the timelines don't stack up.

Paradise was filmed last year, and Timm said his business idea was born during the COVID-19 lockdown.

And look, we don't want to say anyone who owns a business on reality TV is there looking for a way to plug it but... there certainly seems to be a large number of apparel and real estate business owners lapping up the Fijian sun.

Watching the show from Angie's point of view, and with the benefit of hindsight, perhaps her season would've been better with just Carlin and the dog guy. And Greg, we mean Glenn, because we can now see him for what he is: the underrated MVP of all her bachies.

We wouldn't be surprised if Wazza, the man who had a meltdown after being put in a chicken costume, and grimey politician Jess turn up next week. ¯\_(ツ)_/¯